On-Campus Fees During the COVID-19 Pandemic 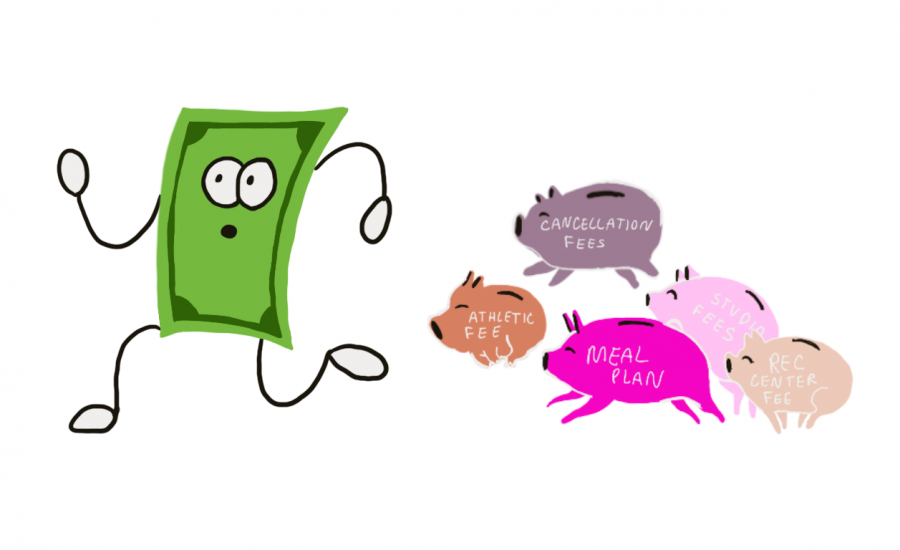 Despite ongoing changes on campus brought upon by COVID-19 such as limited access to campus facilities and last-minute decisions about instructional format, CSU continues to mandate housing contract cancellation fees, regular lab and studio fees, and regular student activity and recreational fees.

This pandemic has sent many students into a financial panic as they contemplate how to properly construct class schedules and living arrangements while monitoring mandated fees and potential refunds. Some concerns addressed by students were regular lab and studio fees despite limited access to these facilities, both during and outside of class times. Students also raised concerns regarding difficulties with the housing contract cancellation process due to cancellation fees and issues with cancellation form submission.

With the state of the COVID-19 pandemic resulting in sudden adjustments and classes transitioning to a virtual or hybrid format each day as the start of the semester approaches, many students have opted to move out of on-campus housing to reduce overall academic costs. Certain classes, such as art studio classes, have arranged to present all lectures and instructional elements virtually while still allowing students optional access to studios and labs.

This optional studio and lab access allows for the course to be coded as a hybrid course. If one class on a student’s invoice is coded as hybrid, despite instructional elements being remote while other classes are coded as virtual, CSU requires the regular fees that apply to face-to-face classes. CSU also mandates these on-campus fees if a student resides off-campus based on the class coding on their invoice. These fees include the activity, athletic, campus access, parking deck, health, and student rec center fees, adding up to a total of $577 per semester.

Montavius Walton, sophomore Graphic Design and Cybersecurity major, believes “it isn’t fair that [students] have an athletic fee and student rec fee of $380 when all programs and parts of the rec center are limited or non-existent.” Walton also expressed that student fees should have been reduced accordingly rather than remaining at normal costs because students are not “being offered a complete, normal semester.”

Multiple students expressed personal dissatisfaction regarding limited access to and decreased hours for facilities due to the upcoming school year being “not a regular school year, far from it,” with students “being charged regular fees,” as stated by Malik Gabeyre, sophomore Biology and Pre Medical major. He continued by addressing the problem of being “charged $180 per semester for the student rec center that is now open for only three hours a day, and even worse, not every day.”

Gabeyre doubted that “there will be anything athletic about fall 2020,” despite students being charged $200 for the athletic fee. He believes these two fees are “the biggest scams on [students’] invoices” and that the other mandated fees are also “a burden to students.” He expressed disappointment with expecting “an accredited institution like CSU to adjust invoices accordingly” but ultimately “forcing [students] to financially struggle.”

Certain students conveyed their confusion regarding the lack of fee adjustments because “it is not [their] fault that the coronavirus is happening” and that a large percentage of the student body is unable to physically attend classes for various reasons, as stated by Jessica Davis, sophomore Painting major. Davis described these charges as “wrong and unjustifiable” because many amenities cannot currently be utilized.

“Student rec fees should be optional because not everyone uses the rec center,” said Davis, as many students opt to live off-campus or opt to not utilize the student rec center during the pandemic.

Art studios and labs are also accompanied by limited access this semester with reduced hours and capacity to follow COVID-19 protocol. Walton revealed that his invoice contains “an art lab fee of $200” with each studio class requiring a regular fee of $100 per semester, “plus an extra course fee of $60.” However, he is able to attend class “only once a week because of the pandemic.”

Davis also commented on her expensive studio fees, “yet [she] can’t even use the studios for most of the year.”

“CSU is taking students’ money and making them think they are being helped when they are not teaching students or giving them their money’s worth” this academic year,” said Davis.

Davis concluded by stating, ”I personally believe that CSU is opening exclusively for profit. It’s too soon to be opening schools.”

Between August 1 and August 31, a housing contract cancellation fee of $800 applies towards students’ bills if they chose to cancel housing, as well as a forfeit of the $200 application fee and $50 activity fee, despite the current state of the pandemic and many classes continuing to transition to a virtual learning format during this period between August 1 and August 31.

Austin Slocumb, sophomore Communications major, experienced the entirety of his classes transitioning to a virtual format last minute. “There’s no point in living in the dorm with classes suddenly being online. I also had to move out of CSU in 48 hours to avoid paying extra fees.”

Peyton Avery, sophomore Biology major, claimed that “housing and professors should have worked together” to establish policies, procedures, and proper deadlines.

“I wish that professors had shared their plans with us sooner so that we could prepare for online learning,” stated Avery regarding decisions related to housing and building schedules.

Overall, these students revealed that they felt CSU has provided them with multiple inconveniences rather than services in exchange for these mandated fees. As expressed by Slocumb, “this virus has made student finances really difficult.”