“Peter and the Starcatcher” sets sail at the Riverside Theatre

CSU’s Theatre Department developed a stunning production of the award-winning play based on a 2004 children’s novel. 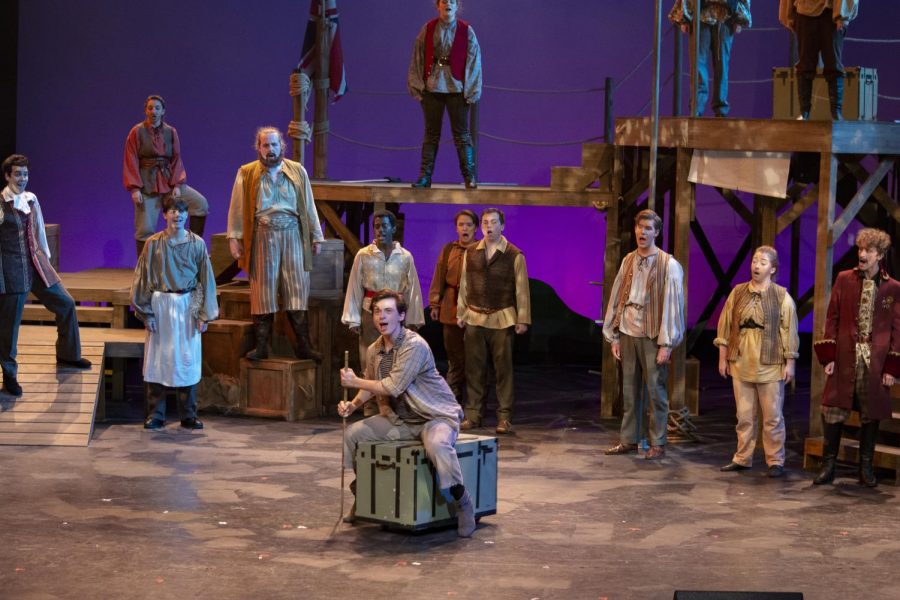 The cast of "Peter and the Starcatcher" close out Act I. Photo courtesy of Joshua Harp.

During late September and early October, students and faculty from CSU’s Theatre Department produced Dave Barry and Ridley Pearson’s adaption of their children’s novel, “Peter and the Starcatchers,” which tells the backstory of Peter Pan from the works of J.M. Barrie.

Once the curtains opened, the set was revealed—a large wooden ship, complete with a helm and deck, occupied most of the upstage area. An ensemble of actors entered from the wings, introducing Lord Aster (Roberto Mendez), his daughter Molly (Sally Swanson), and her alliteration-prone nanny, Mrs. Bumbrake (Will Bradley).

The year is 1885, and Queen Victoria—who is always provided with a hearty “God save her!” when mentioned—rules the British Empire, which is currently at its height. The Queen—God save her!—assigns Lord Aster and the evil Bill Slank (Tiffany Driskell) to voyage to Rundoon with a valuable but dangerous treasure known as starstuff, which possesses magical powers. Aster aboards The Wasp, a ship which carries the treasure and Slank, The Neverland — another ship, with a decoy trunk. Slank secretly swaps out the trunks before the ships set sail.

Both Peter and the fish—now mermaids—are forever changed by the starstuff. One of the mermaids, named Teacher (Macy Frazier), explains her transformation and gives Peter his last name, Pan, meaning “all.”

With much of the humor depending on wordplay and references to contemporary culture, and some scenes including short musical numbers, “Peter and the Starcatcher” is intended for both adult and child audiences.

William Bradley commented that “everyone will walk away from this show with a feeling of childhood nostalgia,” as the play focuses on the importance of childhood. “This play will take your fears and sorrows away for a little while,” Bradley added.

“Peter and the Starcatcher” utilizes a number of plot twists in order to slowly tell the audience how the world of Peter Pan came to be. Despite its brilliance, a play intended for a mixed-age audience presented difficulties to the cast and crew. “The show is a beast to tackle,” said Isabella Minter, who played Fighting Prawn and Sanchez. “Making sure it communicated a complex story clearly was difficult,” Minter explained.

At curtain call, the cast members received applause and a partial standing ovation for their performance. Although the show came to a close on Oct. 6, the cast and crew will remember their involvement in the play.

“I’ll never forget riding across the stage holding onto my bloomers with Tyler Morris [who played Alf] on a teeny-tiny trunk,” said Bradley.

For those that missed the show, the children’s novel that the play is based on can be found at your local library or bookstore.

Peter Pan is a story about growing up. Growing up can be hard, but it’s a necessity of life. If there’s one thing to take from the play, it’s that “we should always have childlike wonder in our minds,” in Minter’s words.