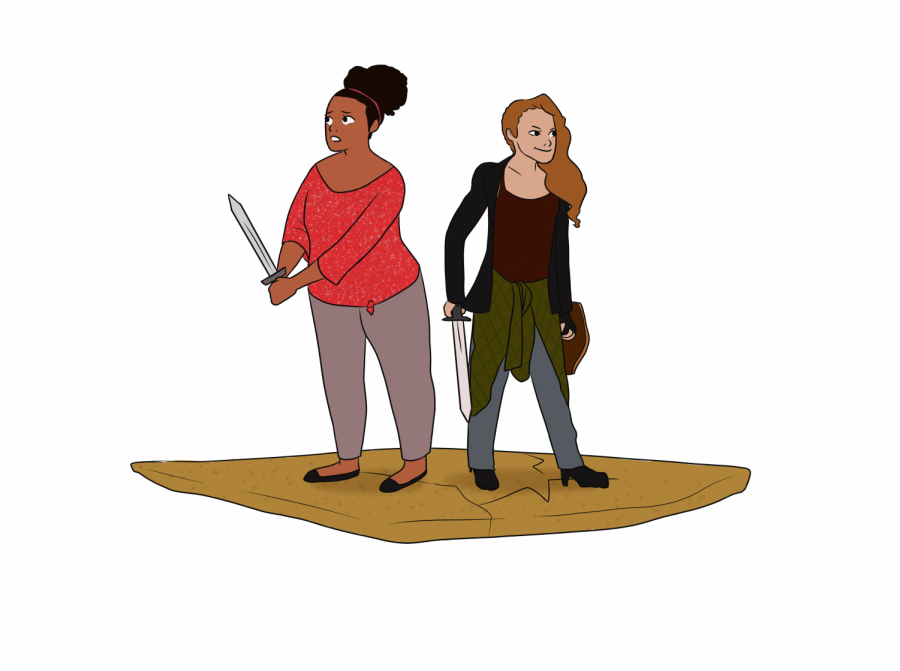 “She Kills Monsters,” a play by Qui Nguyen, was recently directed by theater professor Krystal Kennel and performed at the Riverside Theater. A talented CSU cast rose up to the challenge of learning fight choreography to effectively animate epic boss battles and skirmishes.

“She Kills Monsters” told the story of Agnes Evans (Jordan Battle), a woman grieving the loss of her younger sister, Tilly (Ansley Lynn). When packing to leave her old home after the death of her family, Agnes discovered Tilly’s playbook which described a daring and dangerous adventure. Determined to reconnect with Tilly, Agnes attempted to play Dungeons & Dragons, a game that Tilly was passionate about in life. While playing, Agnes discovered things about Tilly she had never known in this tale of friendship, loss, and acceptance.

The theater was rarely quiet as the group, er, party, went on their quest. If the crowd wasn’t laughing at the many well-timed quips and banter between the lively characters, they were clapping and cheering as the party battled their way through various monsters and demons.

The costumes brought the characters to life as they romped around the stage facing BugBears, evil fairies, and a monstrous eyeball creature. Aside from a few hiccups, all the clothing and props withstood the vigorous choreographed fight scenes and dance numbers. The fantastical costumes in the D&D world were also reflected nicely in the “real” characters outside the game.

The special effects were a treat to watch, and the tension up to the final scene where Agnes fought Tiamat the Dragon was well done, but the fight was anti-climatic. It was too short and lacked the spunk and energy that were in all the previous fights. Though, when I watched the dragon’s crimson-red “eyes” blink into existence as fog billowed out of the cavern it gave me the chills.

The play tackled some heavy issues, too, one of the main ones being homophobia. Agnes, through the game, discovered that Tilly was gay. Shocked, to say the least, Agnes was forced to accept that she hadn’t really known her sister when she was alive. That anger, that feeling of helplessness, followed Agnes to school, where, as a teacher, she could do nothing against the students who had ruthlessly tormented her sister for her sexuality.

“She Kills Monsters” allowed a glimpse into the gaming world that is known as Dungeons & Dragons. As the play went forward, the audience, and Agnes, learned that Tilly was fascinated with the game because it gave her an escape from a world that didn’t understand her or her desires.This desire to escape also bled over to her friends who used D&D to achieve what they deemed impossible in their own lives.

Kelly, who played as Kaliope the Elf in D&D, suffered from cerebral palsy and couldn’t walk in the real world. In game, though, Kelly was a force on the battlefield known for her grace and staff-wielding skills. Ronnie, known as Orcus the Demon Lord, was unpopular and suffered from having the “wrong” body image. But as Orcus the Demon Lord, Ronnie could be strong, feared, and well-known in the world of D&D. Tilly, as Tillius, could be the hero of her own adventure, embrace herself and her sexuality, and get the girl. Together, they could all fight and slay monsters that represented fear, hate, and intolerance in their daily lives.

Although Tilly made it clear at the beginning of the adventure that D&D was not a therapy session, Agnes was able to obtain the image of her sister that she had so desperately searched for. Though they could never be together again, Agnes could relive Tilly’s quest in her D&D tale. Though she was dead, Tilly’s spirit could live on. Tilly would not be forgotten.

“She Kills Monsters” received a standing ovation from the audience as the cast stepped on stage for their curtain call. Needless to say, it was a hit. Alas, the last showing for the play was Mar 9. For those itching to read the tale for themselves, the play is available for purchase online and may be even available at your local library.