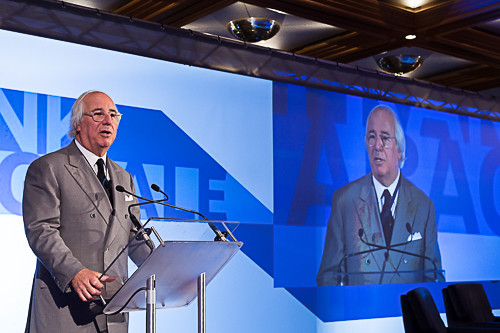 Frank Abagnale Jr, the infamous convicted felon and American conman whose criminal life became well-known after the publication of his 1980 book “Catch Me If You Can ” and subsequent 2002 film adaption, is scheduled to speak at The Forum, a leadership conference held annually at the university.

According to Jerome Mayne, another international keynote speaker on fraud and ethics, the fee to book Abagnale ranges from $20,000 to $30,000.

Known for years as a white-collar crime specialist, coming from a criminal background in writing fake checks, taking on false occupations, and escaping the FBI for years on end, Abagnale’s scheduled speech at this year’s forum has been met with some public criticism.

As early as 1978, journalists tackled Abagnale’s exaggerated claims. The Daily Oklahoman reported, “Frank Abagnale knows less about white-collared crime than most well-read 15-year-olds.” The San Francisco Chronicle covering Abagnale’s appearance on The Tonight Show Starring Johnny Carson, relating a story of a past bank heist, reported, “The only problem is that the Boston Bank exploit, and many [other stories] Abagnale relates, simply aren’t true.”

Though suspicions of Abagnale’s tall-tales were on the table as early as 1978, several other people, including author Alan Logan and Swiss forensic pathologist Jean-Loup Gassend, have written publically about the dubious credibility of Abagnale’s life stories. Both of them reached out to The Uproar via email, expressing their concern that CSU booked Abagnale to speak at the university.

Logan, author of “The Greatest Hoax on Earth: Catching Truth, While We Can,” a non-fiction book that investigates details of Abagnale’s life, wrote that “Abagnale’s fake story, as it bumps up against the current crisis of misinformation and suppression of voices, including victims voices, is certainly one of the vital issues of our time.”

Gassend, who has written letters to newspapers such as the Greenwich Sentinel, watched an online Google Talk on YouTube in 2020, where Abagnale made a speech. After attending the speech, Gassend purchased Abagnale’s book, but was shocked to see that details in the book directly contradicted what Abagnale said during his speech.

“I don’t think this pathological liar should be allowed to speak publicly at a university,” wrote Gassend in his email to The Uproar. “He shouldn’t be allowed to continue lying in public the way he has for the past 40 years.”

As recently as last year, Frank Abagnale’s claims and supposed criminal background—especially that of the events within “Catch Me If You Can”—have been called into question by other sources as well. Reports, articles, and online videos of Abagnale’s recent lectures and talks have shown to perplex and outright contradict his past claims. Thus bringing reporters, criminologists, and enthusiasts to take on researching Abagnale’s story.

Public Federal Records show in December of 1964 through February of 1965, Frank Abagnale Jr. was enlisted in the United States Navy, being discharged in February of 1965. A week after his naval discharge Abagnale was arrested in Mount Vernon, NY, for low-level larceny via check, and was later re-arrested the following month in Mount Vernon for Vagrancy.

On June 2, 1965—at the age of 17—Abagnale stole blank checks from a local service station at the Bronx River Parkway, and was arrested in Tuckahoe, NY, on June 15, 1965. He was sentenced to three years in Comstock Prison. After two years, Abagnale was paroled to his mother in May of 1967.

He was re-arrested weeks later in Boston, MA, for auto theft and low-level larceny. Abagnale stayed at Charles Street Jail in Boston for four months and was later sent back to Comstock for violation of his parole, in which he stayed at Comstock Prison till December 24th, 1968.

The events within the popular 1980 autobiography, the 2002 film adaptation, and within the 1978 Press kit covering Abagnale, tell the story of a young 16-year-old who successfully got away with playing the role of an Pan American pilot, who traveled around the world to some 26 foreign countries, all while writing $2.5 million dollar worth of bogus checks.

The 1978 Press Kit states Abagnale got away with these crimes over the course of  five year while “posing as an airline pilot, doctor, lawyer, college professor, stock broker, and other professional persons.”

According to Public Federal Records, from the ages of 17 to 20, Abagnale was in fact incarcerated, and prior to that time was enlisted in the Navy. It wouldn’t be until Abagnale was 22 years old that he did dress and pose as a Pan Am pilot for three months in the fall of 1970. Over the course of three months, Abagnale only wrote 10 fake checks donning the famous Pan Am logo, all signed under his real name. The sum of which equated to less than $1,500 dollars.

Abagnale’s FBI chase, and prison escapes, which the 1978 Press Kit estimates having begun since 1965, took over six years when Abagnale was caught on Mar. 30, 1971. However, the FBI chase in reality only took three months, and there had been no mystery as to the identity of Frank Abagnale. His claim to escape from the highly secure Atlanta Federal Penitentiary had never occurred, due to the fact he was never housed there.

He was released from prison and was on federal parole from 1974 to 1981, it would be during this time Abagnale would come to the forefront of the public eye as a white-collar crime specialist. For the next 40 years, Frank Abagnale gave lectures, co-wrote books, and worked with the FBI to fight against white collar crime.

Frank Abagnale is scheduled to attend and speak at Columbus State University’s Forum on Aug. 31. Individual in-person tickets cost $279, while tickets to watch the virtual event cost $99.  For more information about The Forum and its scheduled speakers, please visit theforum.columbusstate.edu/.

Updates: This article was edited on June 24, 2021 at 10:37 p.m.. We stated that Gassend attended the Google Talk, but he actually watched the event via YouTube.

The Uproar reached out to CSU Relations and Abagnale for comment on 25 June. CSU Relations did not respond, but Sarah Hammermill from Abagnale and Associates did. Hammermill said, “Mr. Abagnale is aware of the book. He has not read the book you referred to and does not feel it is worthy of a comment,” and added that “the CSU Forum booked Mr. Abagnale to speak about Cybercrime and not about his life.”