A day after faculty moved to present their letter advocating for online learning to the USG Chancellor, a letter signed by USG presidents went up on the USG website. This letter reiterated the plans for in-person instruction and did not address the concerns raised in the CSU faculty’s open letter. 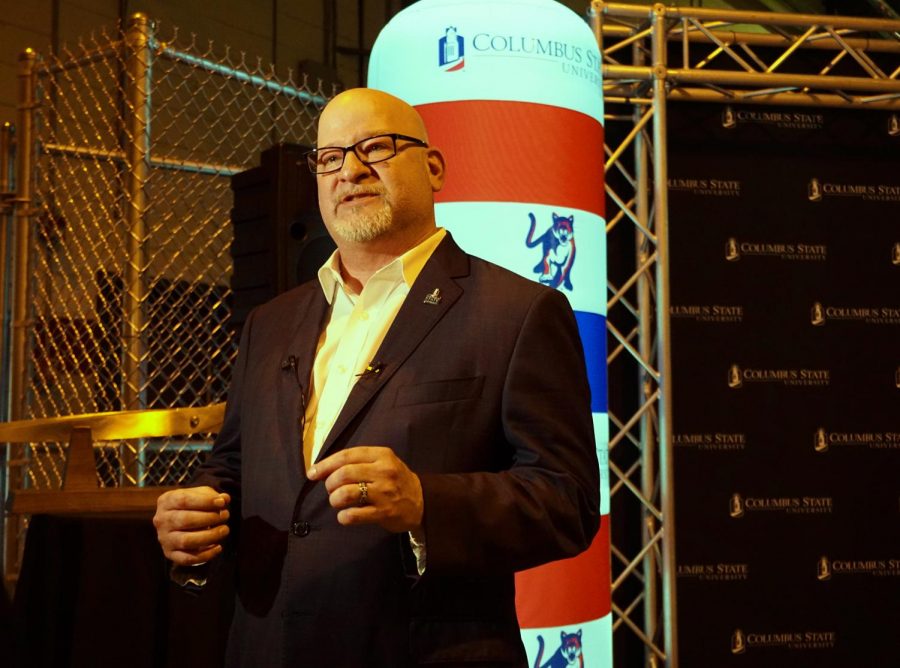 President Markwood, one of the 25 USG presidents to sign the recent letter. Photo by Abigail Lloyd.

In the midst of faculty movements across the state to make online learning the default, the University System of Georgia released a letter dated for Tuesday, July 21, signed by USG presidents, including President Markwood. This letter reiterated the sentiment that the USG has continually expressed the last few months: face-to-face learning will be the priority for Fall 2020.

Tuesday’s letter from USG presidents did not address any of the concerns raised by the CSU faculty’s open letter.

“Resuming in-person classes this fall will be a difficult but important task, and it is one we are committed to achieving, as it serves the best interests of our students and the State of Georgia,” the USG presidents’ letter reads. “[…] We appreciate the ongoing leadership of the USG to provide consistent approaches on our campuses and to help secure the critical resources we need to succeed during these unprecedented times.”

However, many professors seem to find the reopening procedures far from consistent. CSU has continually informed its professors that many decisions on how to ensure a safe classroom experience will be up to the individual departments.

New guidelines require that only a certain number of students can be in a classroom at a time to allow for social distancing. “It seems that with the new guide on number of students per class – for those folks with large class sizes – the new ‘class size’ means that even if we divided classes into two, the space would not accommodate half the class,” wrote Professor of Geology Dr. Amanda Rees during a faculty meeting last month.

During that same meeting, Department of English Chair & Associate Professor Dr. Judith Livingston expressed similar concerns about the lack of clear guidance. “I don’t know what to do today,” said Dr. Livingston. “I don’t know how to get started.”

Faculty members involved in the faculty open letter were largely surprised by the USG presidents’ letter. Dr. Rees wrote that she was “very disappointed to have read this letter,” and that she would “leave the commenting” to Professor of Biology Dr. Brian Schwartz.

Dr. Schwartz is the head of the CSU chapter of the American Association of University Professors, which was recently reactivated in response to the issues surrounding reopening for Fall 2020.

“I was very surprised and disappointed to see that President Markwood had signed it,” Dr. Schwartz wrote in an email to The Saber. “It stands in stark opposition to both the faculty’s open letter and the CSU AAUP’s statement, which has been shared with both the CSU and USG leadership. I was under the impression that President Markwood supported the positions outlined in the faculty’s open letter. Therefore, I was confused and disappointed to see his support for in-person instruction being in the best interests of students and the state of Georgia.”

The CSU AAUP’s statement mirrored many of the same concerns and objectives the faculty’s open letter had.

“Students and faculty should be allowed to assess their own risk and respond appropriately, even apart from the allowances already provided by the USG,” the statement read. “When learning objectives can be adequately achieved online, no one should be forced to risk their own and their loved ones’ health and lives by participating in face-to-face.” This statement also referenced the politicization of reopening schools and universities as undermining public trust in the decision-making process.

Both faculty statements emphasize the increasing local cases as well as acknowledge the need for some limited face-to-face instruction when it can be achieved safely. 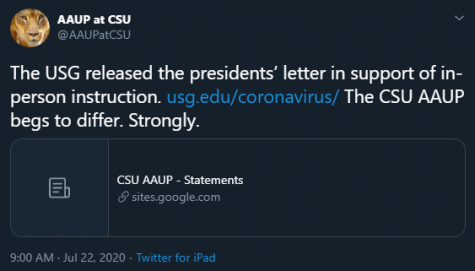 Students have also expressed worries about face-to-face instruction. The responses of an informal online poll by The Saber included, “I’m worried we will have to switch to fully online and cause more chaos,” and, “How are we going to social distance in classrooms (6 ft apart) with limited space to [?]” Another student expressed worry over the potential risk of contracting COVID-19, while a different student raised concern for elderly faculty’s safety.

The Saber has reached out to President Markwood for comment. USG Chancellor Steve Wrigley has yet to respond to any of The Saber’s requests for comment.